I hear there is a Lunar Eclipse tonight.  I hope to see it.

What I did see, already, was touching and  should be shared, like a Lunar Eclipse, maybe coming away with a bit more appreciation of what we have and yet take for granted sometimes.

When I visited the Apple store at the Louvre yesterday I noticed some things that I would not have necessarily noticed  upon leaving there had I  1) not gotten lost once again in the basement of the louvre next to bountiful shops looking for the exit to the metro, and 2)  not been locked out by by Navigo Decouvert metro card.  Either it registered and I wasn’t fast enough to go through,  or ,  for whatever reason it just didn’t work.  I spent the next 8 to 10 minutes in “lockdown mode” before it would work again – looking at the metro map to make sure I knew my route before going into the metro to get to my friend Cate’s apartment.      I also stood by the ticket stalls watching people.  There was a tall scruffy man with his “earthly possessions” in a bag smiling as people walked by him, and before that he had been digging in the trash receptacle  pulling things out and placing them in his wrinkled bag.  When he got what he needed from the receptacle he stood by the handicap door leaning on it, pushing it, to no avail because these doors won’t open unless there is someone who 1) has a key or card for it to open, or 2) someone opens from the other side for them. I watched as most people either went through the stall closest to him, seeing him, but ignoring him, or they completely avoided the stall next to where he was standing and went to the other stall further away.  One woman, who looked an awful lot like “Grandma Betty”  started to go through the stall, but stopped short, looked at this fellow for a moment, watching him, intently, while others flew through the stalls as she had stepped off to the side.   Then she went through the stall closest to him, came out, turned around and opened the door for him from the other side.  He was able to get through now, and get on the metro with all his earthly possessions.    I am glad that my decouverte card stopped working for 8-10 minutes because I will now know what to do when these underprivledged/ or handicapped  people need to get through that door.  Now I know how it works ! 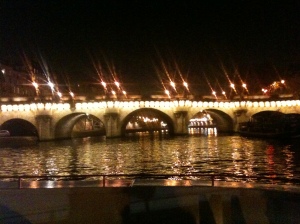 Sometime later  I  left the American Church in Paris after working with the children and the “Blessing of the Greens” for Advent and the kid’s crafts – ( I helped them with cookie decorating)   then swept and washed up.  After this fun project was over,  I walked outside  and the most beautiful thing happened….. Outside the church,  which is next to the Seine, there was  a very strong misty rain, and I glanced over and  saw the bateau mouche with lights all aglow on the city and the misty rain  casting a halo like appearance on everything.  SO very  BEAUTIFUL!!  As I continue my walk on the Quai d’Orsay, – all of a sudden, out of no where,  there are these gorgeous bells ringing (probably from Notre Dame)  and it is the most  lovely thing to hear,  ever .  I cannot believe it.   My  walk continues down the wet street , the umbrella held high with not a care  at all that I’m getting wet because it is just so magical a moment……and I’m so thankful that I am here – I have so so very much to be thankful for and I don’t ever want to forget it.