Posts from the ‘code’ Category

There was a smashing good time at the CHRISTMAS office party tonight at the flat of the “big guy”. Yes, this is code for another word.  I can’t tell you what an eye opener it was to attend this party.

And, If I go into detail and mention the name of David’s employer, or where he works, he may not work there any more.  I need to keep him working there!  It’s all subterfuge, really, kind of like those brave people who worked for MI5 and could never say a word.  Suffice it to say, it is NOT a FRENCH company.  There. I’ve said it. Go figure it out.  Anyway, the people were lovely, all the co-workers of his were very kind, and of course the champagne was flowing and so were people’s words.  I’m wondering if the things “promised to be sent to me by email” will actually get sent because I don’t think a soul will remember one word  that was spoken,   truth be told. I was half minded to tell them anything when asked “and what do you do?” because it would have been so fun to say, “Oh, I’ve been  studying the last 4 full-blooded  Tasmanian Aborigines and the book I’ve just completed on this study is to be published  in French and out in 2012.!”   No one would know?  Right?  Instead, I asked them about THEM & that is always the way to do it in Academic settings such as these.    It was really good champagne, so much so, that we left before even getting David’s gift (exchange), so that was the way it was.  Everyone would be there until after midnight and there was much dancing going on in the one of many rooms of this palatial flat.  The evening was most merry and I love that this was actually called a CHRISTMAS PARTY and the invitation actually allowed a Christmas Tree on the letterhead with a tiny Santa at the bottom.   Lovely, being included  at a real CHRISTMAS Party,  not HOLIDAY party!!   I could not believe the size of this place, the lovely marble stairs

going up to the high floor but especially loved the ceilings.  The ornate ceilings inside were simply “jaw dropping”  should you be able to look up for any length of time. (“Oh, Hi, yes, it’s not that I’m not interested in what you’re saying, it’s just that the CEILING, is just so beautiful., so sorry, DO go on….” 😉 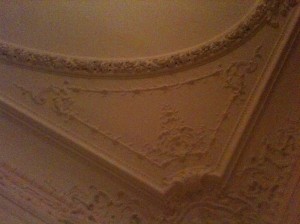 This particular apartment was on a most prestigious Boulevard in a famous arrondissement. I had to laugh, because there was ONE wait staff person (actually the BUTLER)  handling all of this food and champagne and soft drinks for about 65 persons. When Melanie and I have done parties like this we’ve had at least three people working them.  I took a picture of “The Bar” for her  because it was not as we would have expected it to be. 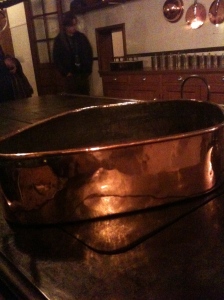 This would do for me & Melanie! Every liquor known to man, teeny little slivers of lemon rind, tiny cuts of limes, toothpicks, olives, teeny white onions, cherries,  everything to make whatever cocktail was needed.  We’d have carted platters of hor’s doeuvres (which they certainly had here as well) , but they were placed on the long table, more than carried about for people to ever so gingerly pick up and place on their napkin.  When we left the party, it was raining pretty hard, so thankfully I had my ever present umbrella by my side and we walked to our Metro in shivering rain, along Pont Alexandre, passing the Eiffel Tower in all it’s majesty as it was on the hour now and lights were shimmering mightily.                                         Pont Alexandre and Eiffel in  Fog.