Santons and their History

by a day in the life of an adventuresome couple; not your average AARP Seniors on December 9, 2012 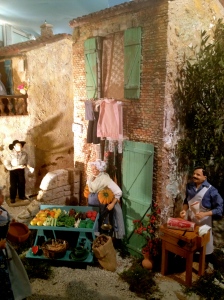 This is the season for Santons!!!   They are EVERYWHERE in the the Marseille region and also in Aubagne, where we often take a drive.  The way in which they are displayed is an art work all on its own, showing complete villages from the 17th century  with families, friends, bakers, farmers, blacksmiths, and the lighting adds to this ambience.

One of the highlights for me in all of the Santon displays were the special ones created without any forms, or molds  and were crafted by hand.   They were shown in the Provencial museum Chateau- Gombert in the 13th Arrondisement of Marseille.  Here is an excerpt of the trade that you will enjoy. 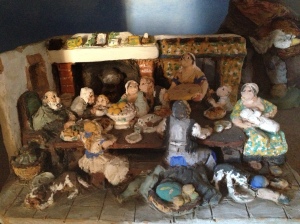 Santons are clay figurines that depict the colorful people, traditional trades, activities and costumes of Provence. Santons derived from the idea of the Provencal inhabitants on their way to the Nativity with their humble, local offerings.

Santon comes from the Provençal “santoùon”, or little saints. Another, probably parallel, derivation is from the Italan “santoni”, a shortened version of “Santi Belli“, for beautiful saints. Santons have come to typify the people of Provence, their work and their trades, and they are generally depicted in 19th-century dress.

The original Crèches in Provence date back to the 17th century, when the few bas-reliefs evolved into carved wooden figures and eventually included marionnettes, clockwork characters and even costumed children in living crèches.

In 1789 the churches were closed, depriving the population of crèches to observe and depriving crèche makers of their market. Jean-Louis Lagnel (1764-1822) of Marseilles, who made molded figurines for the church crèches, decided to make the santons for the general population, at a price they could afford.

Santons for the public became an instant success, and an industry (and tradition) was born. A santon fair was started in Marseille, and then another at Aubagne (10 km to the east), and before long there were santon fairs at villages throughout Provence. Today santon fairs and exhibitions are a common regional event during November and December. The original Marseille santon fair is still in existance, from the end of November to Twelfth Night (Epiphany).

Santons made for the Nativity scenes (crèches) include the three wise kings who join the shepherds to visit Joseph, Mary and the baby Jesus. In addition to the Christmas scene, crèches often depict typical Provencal villages. The largest crèche in the world (an official Guiness record) is an 1136 square-meter miniature of a Provencal village, located in the town of Grignan in the Drôme, 10 km west of Valréas.

Provencal santons are made from the fine clay (argile) found in the region of Marseilles and Aubagne. Two-piece plaster molds made from original carvings are filled with the clay for molding. The piece is removed from the mold for painting before beind dried and baked. The hand painting is done with great care, using bright colors and with encredible care for detail.

Santon making is today one of the cottage industry trades practiced by artisans in some of the smaller villages in the Beyond region. You can find santons in village shops and ateliers, and often in the markets.

The Bouches-de-Rhône, with its history of the Marys (see Saintes-Maries-de-la-Mer), has a rich source of santon festivals every winter. Arles has its well-known Salon International des Santonniers. Fontvieille had been hosting a Foire aux Santons for over 20 years. Tarascon (north of Arles  and Gardanne (south of Aix both have a santons weekend at the end of November. The town of Aubagne, just east of Marseille  has a biannual santon festival on even-numbered years ( 2008, 2010, 2012 …)