by a day in the life of an adventuresome couple; not your average AARP Seniors on November 12, 2012

But First, before I do smash the living daylights out of this garlic, I am going to go back to 3 hours ago when the sun was setting on the Mediterranean, in the brightest orangey red color imaginable setting off the deep blue of the jumpy sea.

It was here, on the long cement steps, that  my French workbook beside me and  the cool evening tide breezes were my only company. 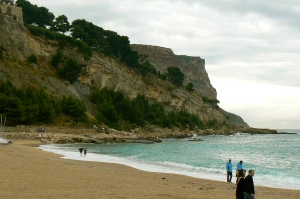 I gazed at the sunset, saying the same French phrases over and over.    One little boy playing kick ball was out there on a beach area the size of an American Football field when just weeks ago there were hundreds of sun lovers.  It’s the end of Fall now in Cassis and the tourists are still here, but only in dribbles.  It’s actually very serene and quiet and when you travel the teeny narrow cobble stone streets down to the port and then the sea, you feel very much like you are a real Cassidien, which we are, because the sticker on our little car says  we are. Yeah.  🙂

Well, it became quite cool, as the sun set behind the Calanques and  the 2 women and the little boy,  the two British gentlemen (advertising executives, I guessed, from listening to their cell fone conversation over at the café 10 minutes earlier while I had my chocolate crêpe)  were talking once again, on their phone next to me by the sea…..

I had the strongest urge to ask them if they had  a car.  Not wanting to seem “forward” I kept my mouth shut, but wish now that I had said something, because he made a comment to the person on the other end of his  phone line that he had not been here in Cassis  for 30 years.  If I had said what I had wanted to say, it was, “If you have a car, please take it up to the top of Cap Canaille as it is one of the most superb viewpoints in France.  It looks west to the mazy coastline of the Calanques with offshore islands and rock pinnacles that seem to float in the air!   Alas, it didn’t get said, and they disappeared. .  The sun was now behind the cliffs  & the Calanques by now and I started to put my stuff together to head home,  along with the other few people on the beach.

It was so different than at noon today when it was bustling with maybe 20 more people than now.  Of those 20 , FIVE of them  were old people, and I’m talking OLDER than me by 20 years who, – get this………stripped out of their very interesting Fallish Marseillese clothing, in full view – down to their one piece bathing suits, donned a bathing cap and walked briskly into the cold sea……..to SWIM………for atleast , (I counted)  20 minutes!!!!!!  Stunning!!!   Remarkable!!!!!!  Could not believe it.  I watched them come walking out of that sea – invigorated and seeming much younger than their 80+ years……..

and had a new found respect for these 5 people, who all knew each other and were laughing and carrying on with one of the most amicable conversations that I have witnessed with this particular age of people.  It was the most entertaining and enlightening 1 hour I have ever spent anywhere. And the SWIMMING…… I can’t even put my big TOE in that water…….maybe I should try ……

PART II  of Grab the Knife & Smash the Garlic – – Tomorrow

From: peaceful
← For the NON-REVs in this world…..another True Story, plus Watching 1960 B&W TV French Comedians and Singers at 3 in the morn
Grab the Knife, Part II, Garlic in FRENCH = Ail →
3 Comments Post a comment