The Apartment – Stage Three – Driving where no man should drive

by a day in the life of an adventuresome couple; not your average AARP Seniors on September 12, 2012

Step 8 )   THis is where the RED BULL and copious amounts of  Expresso’s  start to take kick in  – and we  drive into a city where NO MAN HAS EVER GONE _(meaning – NO ONE IS SUPPOSED to DRIVE IN PARIS, least of all TOURISTS, – as PARIS is NOT the city for cars – especially tourist cars – BUT – we had no choice. )  You say, “But, there are lots of cars in Paris.    WHY can’t you drive in Paris? —Why?   (It’s just not done. It’s not even done by Parisians.  All those cars in the city?  I have NO IDEA who they belong to, but they’re not Parisians, and certainly not tourists.)   ANYWAY, we must drive into the city streets of Paris BECAUSE we have, in our possession,  an inferior , to say the least ,  – GARMIN GPS that did not speak the street names.  This meant finding  another FNAC to return the Garmin, for any GPS that SPOKE to us.    Marti Drives along the fast Peripherique (the Paris Beltway) 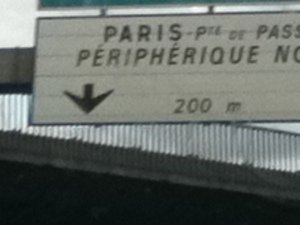 when she sees a huge sign “FNAC”  –  on a tall building.     VOILA!!!    This is a SIGN, in more than one sense of the word!!!!!   She  swerves,  at 80 MPH,  into the EXIT lane and drives around and around trying to find where this huge  building is located with the FNAC sign.    We park.    We walk.  We ask 50 migrate workers   – who are in a big group waiting for jobs on this street corner – – “IS this the FNAC where we can exchange our INFERIOR GPS????”  Atleast 20  heads are now peering inside my FNAC BAG – with my GPS, and  David thinks that they think that I’m trying to SELL a hot GPS that I’ve swiped from some rental car.  David expects them to start bidding on the “HOT GPS” any moment as they are talking among each other.

At this point,  I have to EXPLAIN, that I just want to E X C H A N G E this inferior GPS not SELL it. IS THIS THE FNAC I should go to?   Blank stares.   We reach the entrance of the FNAC building and the GUARDS  stop us and say, NON!

The real FNAC store is somewhere in a big mall on the Place d’Italie – in the South of Paris.

We go around many times, – similar to my going around & round the Arc d’ Triumph –  when I was 15 (with my mother )- and we actually find an indoor, underground parking garage below a little FNAC sign.  Eureka!

We are now back in business.  THREE HOURS LATER.   We are the proud owners of a workable GPS, (now a TOM TOM, for an additional  99 euros) that actually TALKS to us and gives us STREET names and tells us when to turn,and when we are going through school zones and beautiful vineyards (okay, well, not the VINEYARD part)  –  all in a fine female British accent.  To get this gem of a GPS,  We have waited in line for what seemed like an eternity, did more paperwork than I’ve ever done for any return in my life -described what was wrong with the Garmin- waited in more lines –  – take that NEW paperwork  to another FNAC clerk, and finally, FINALLY purchase the new GPS that actually SPEAKS to US.   It’s  a beautiful thing.

Step 10) 2 days later – arrive in Cassis  – the most beautiful village I have ever seen in all of France,

(and I’ve been everywhere).