I’m Visiting the Queen Tomorrow so………….

by a day in the life of an adventuresome couple; not your average AARP Seniors on June 2, 2012 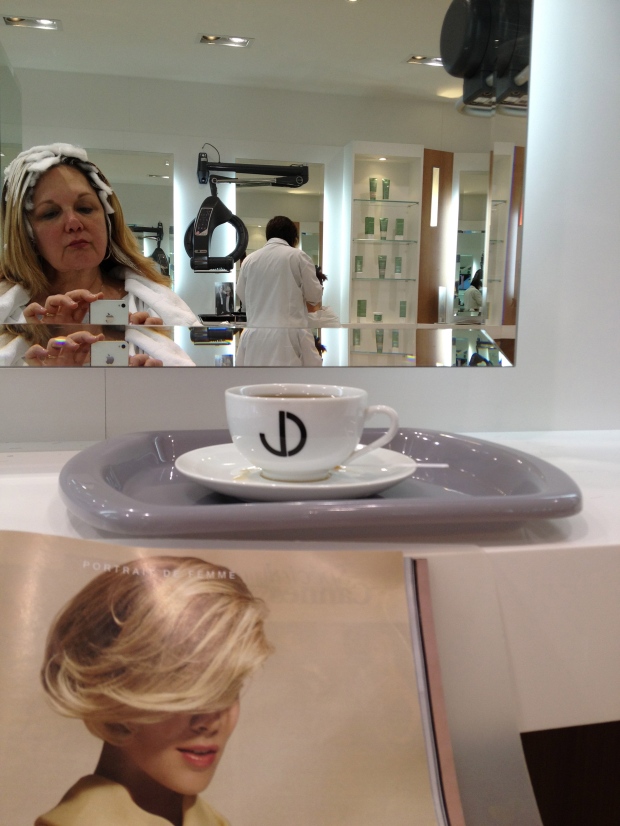 I couldn’t resist having my hair done at my old standby Jacques Dessange where I went “back in the day” -Those days were?  You ask……..

Okay, those were the days my friend, we thought would never end  – – – where  I had a teeny disposable

income and flew to Paris on my passes to get my hair cut and colored. At Jacques Dessange. For the weekend.

Ahhhh, there is nothing like working for the airlines BEFFORE 9/11, where the income was good, you gained seniority fast, and you actually got

to fly for free on a weekend, when the planes actually had seats for you to get on, not like NOW, where you’re lucky to get on ANY flight………

So, She’s coming, ………okay, she’s not coming to Paris, However,  The Queen’s Diamond Jubilee  2012   Parties have begun in earnest all over the tiny British Isles and the Continent

English: Location of the British Isles on the European Continent (Photo credit: Wikipedia)

and maybe even in the US, for all I know, but “alls I know,” (that’s a horrible Missouri expression) is that we have been invited by the British ( I can’t say which association – but you can guess) and we are delighted to go, despite having to find garb in all RED WHITE and BLUE.  I found a few things in my closet,  left over from  past Fourth of July events in the US, –  I hope it isn’t too dated.   I’ll let you know by how many stares I get.  But honestly?  To find a pair  –  absolutely LOVELY little red shoes, to go with what I already owned, caused extreme apoplexy – 170 EUROS………yes – you heard that right – it’s EUROS, and it’s 170 of them, and yes, they were Repettos, but STILL FOLKS………..I can’t DO THIS!!

So, I have something that will work .No, I’m not wearing the Union Jack.   It just plopped itself at the end of this post.

But I sure loved those bright red repettos!

Maybe I can wear my Christmas Red Boots

I always find RED, love Red, love RED, but NO to those RED REPETTOS!!!

Tags: British Isles, Buckingham Palace, Christmas, Elizabeth II, Missouri, Monarchy of the United Kingdom, Paris, United States
From: best time of my life
← Stepping up to the Train, on a Very Hot and Steamy Paris Day
Stepping Off the Train in Cool, Breezy, Sunny Deauville-sur-Mer →
2 Comments Post a comment